Keeping the same energy for anti-racism

The challenge to keep the same energy for anti-racism

Three weeks ago a man named George Floyd was killed by police. #BlackLivesMatter (a movement founded in 2013 by three black women) has been ubiquitous on social media, with Black Lives Matter protests taking place every day since George Floyd’s death and many people sharing social media posts expressing solidarity with the anti-racism movement.

Something that has been brought sharply into focus for black people and their allies is the question of how we are going to maintain our energy and support for the BLM movement long term. Protesting and social media posts aren’t for everyone and many people have worried over pressure to post on social media and ‘look’ as if they care about Black Lives Matter. Thinking about how we are going to continue to advocate for the social, economic and political liberation of black people has been daunting for many of us, but this doesn’t mean that we should give up.

Show up for Black lives with your purse

For solidarity for black liberation from racial injustice to move beyond social media platitudes and protest photos, allies of black people must be ready to show solidarity financially (where their income allows). After donating to multiple fundraisers for the families of black people who have died and organisations conducting work to support black communities, I knew that one time donations in solidarity with Black Lives Matter was not enough.

Financial support is a straightforward way for you to show your solidarity with black liberation in practice. This is especially true if you are from a wealthier background or are working in a well-remunerated area of work. In my case the former is true – I am a first generation immigrant but I am also what you would consider as middle-class. Even though I was the first in my immediate family to attend university, I attended Bar school and am currently employed as a paralegal and will be working as a barrister in the near future. This puts me in a position to share some of my economic privilege to help fund anti-racism organisations.

Show solidarity for the anti-racism movement by utilising your privilege

If you are also someone in a similar economic position as I am, financial commitment to anti-racism is essential. A point to make here is that I am a black woman who was educated at an independent school from 13 years old and currently holds three degrees and postgraduate qualifications. I am directly affected by institutional racism but am also afforded privileges that help me navigate it or avoid its harshest effects. This is not the same for black people who are poor or have not been educated to the level that I have.

If you are white, a man, independent school educated (or all of the above) you are benefiting in some degree from a racist and classist patriarchy that allows you greater access to wealth and the highest paid jobs. As much as you may find yourself freezing up and anxious over how to show your support for anti-racism and the Black Lives Matter movement, making financial contributions can be a decisive step to use your privilege for good and ensure that your solidarity is not merely performative.

Find organisations you support and genuinely want to give to

Before George Floyd died there were organisations doing the hard work to fight against racial injustice. If you have been moved by the Black Lives Matter movement and are serious about your commitment to anti-racism, then you will research the organisations you wish to support and make regular financial contributions to them.

The importance of financial support for organisations advocating for black liberation cannot be underestimated. With financial support organisations such as Black Protest Legal Support can continue to provide legal representation for Black Lives Matter protesters in the UK. Financial support can also help StopWatch, an organisation committed to campaigning for transparency in policing and challenging the use of police powers such as stop and search on black people in a way that is racially disproportionate.

If you feel that writing an Instagram caption is your only option to show solidarity, a screenshot of a donation will have much more power and significance and communicate the message that if you are going to show up for black people, do so with your purse.

Incorporating donation and fundraising into my financial lifestyle

The first way that I plan to show consistent financial support is by setting aside 10% of my monthly personal spending budget to support Black Racial Justice and Community organisations. I chose this number because this is the amount that works for me and I can easily set this money aside each month.

Regular donations can fit easily into your lifestyle if you take advantage of the different modern financial tools available to you.  For example, most banking applications allow you to round up your spending and place it into a savings pot. This could be the money you withdraw each month to commit to black liberation organisations. Alternatively, if there is a particular organisation whose work particularly speaks to you, you could set up a direct debit for a set amount each month.

The reality is that whilst those with privilege can ‘switch off’ from racism, black and minority ethnicity people cannot and the organisations that represent and advocate for them are conducting this vital work 365 days a year. Making your financial support of these organisations a lifestyle commitment would be a major step for anyone committed to taking and maintaining their anti-racist stance in the face of systemic racism.

Incorporating fundraising into my enterprises

As well as donations from my personal finances I have pledged that 20% of all the proceeds I make from my work as a Digital Creator will go to organisations focused on providing legal representation and services for black people. I chose to do this because my voice on my online platforms is that of a black woman and everything I say and do is steeped in that experience. I want to ensure that those who invest in me and my brand are also investing in organisations committed to enabling the social, political and economic liberation of black people. By doing this I want to draw a line and ensure that my financial commitment to anti-racist organisations is wholly entwined with my personal brand.

Show solidarity in your own way but just show up

Each of us can find a way that we can show solidarity for anti-racism consistently and not just while the movement is at the centre of public discourse. In order for change to be achieved and for black people to live free from racial injustice, we must continue to fund organisations challenging systemic racism and providing vital support for marginalised people. We must continue to show up, even when it is no longer popular to post #BlackLivesMatter and talking about race is seen as ‘too much’ or ‘too divisive’. We have to continue to keep the same energy. 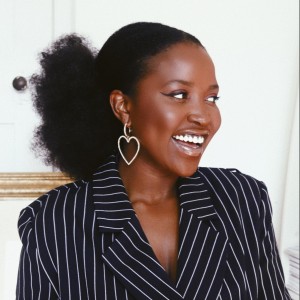